This little lizard is just loving the record heat… 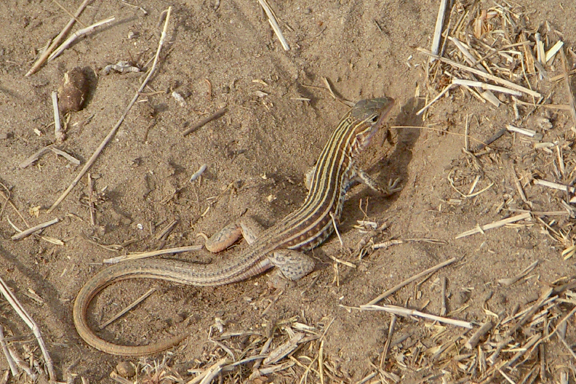 If anyone’s been loving  the record summer temperatures we’ve been enduring here in south Texas it’s this little gal that we happened to stumble upon recently during our rounds of the land. According to the Toledo Zoo the desert grassland whiptail lizards really like the heat, and prefer super high temperatures well over 100°F.  And, to top it off  they are most active during the day when the temperatures are hottest.

How do we know it’s a little gal and not a little fella? Well, it turns out that the desert grassland whiptail lizard is an all-female species. They reproduce via parthenogenesis without males – i.e. according to the U.S. Fish & Wildlife Service their eggs essentially hatch without fertilization and their offspring are genetic replicas of the mother. That said they still have “courtship” and “mating rituals” to help in the reproduction process. These interesting little lizards have green to greenish blue tails, striped bodies, and grow to be about 6 inches long. They often probe cracks and crevices and dig in loose soil, foraging for insects and their favorite goodie: termites!  However, they have to be careful themselves and always be on the lookout because according to the U.S. Fish & Wildlife Service they can easily become a tasty meal for longnosed leopard lizards, roadrunners, and loggerhead shrikes.